It’s the simplest, most useful way to understand the global monetary system (that I know of). This is crucial knowledge, because that system is falling apart.

Superbubble is about that collapse. It shows you how:

• the US dollar is hugely overvalued and,
• physical gold is hugely undervalued.

Maybe that sounds simplistic or unimportant. But these skewed valuations contribute to most of the political and economic chaos happening globally.

The chaos will continue to get worse and more crazy until these unsustainable valuations are corrected.

Luckily – for some people – the correction is well underway. Sadly – for most people – this correction will be chaotic, confusing and terrifying.

Humungous unpayable debts will be written off, triggering an enormous financial collapse. There is more debt now than at any time in human history, so expect the biggest crisis in human history.

Superbubble is the word I use to describe for the US dollar-based international currency system.

This system relies on ever-increasing amounts of US debt being exported to the rest of the world.

Or it collapses. That is what’s happening now. 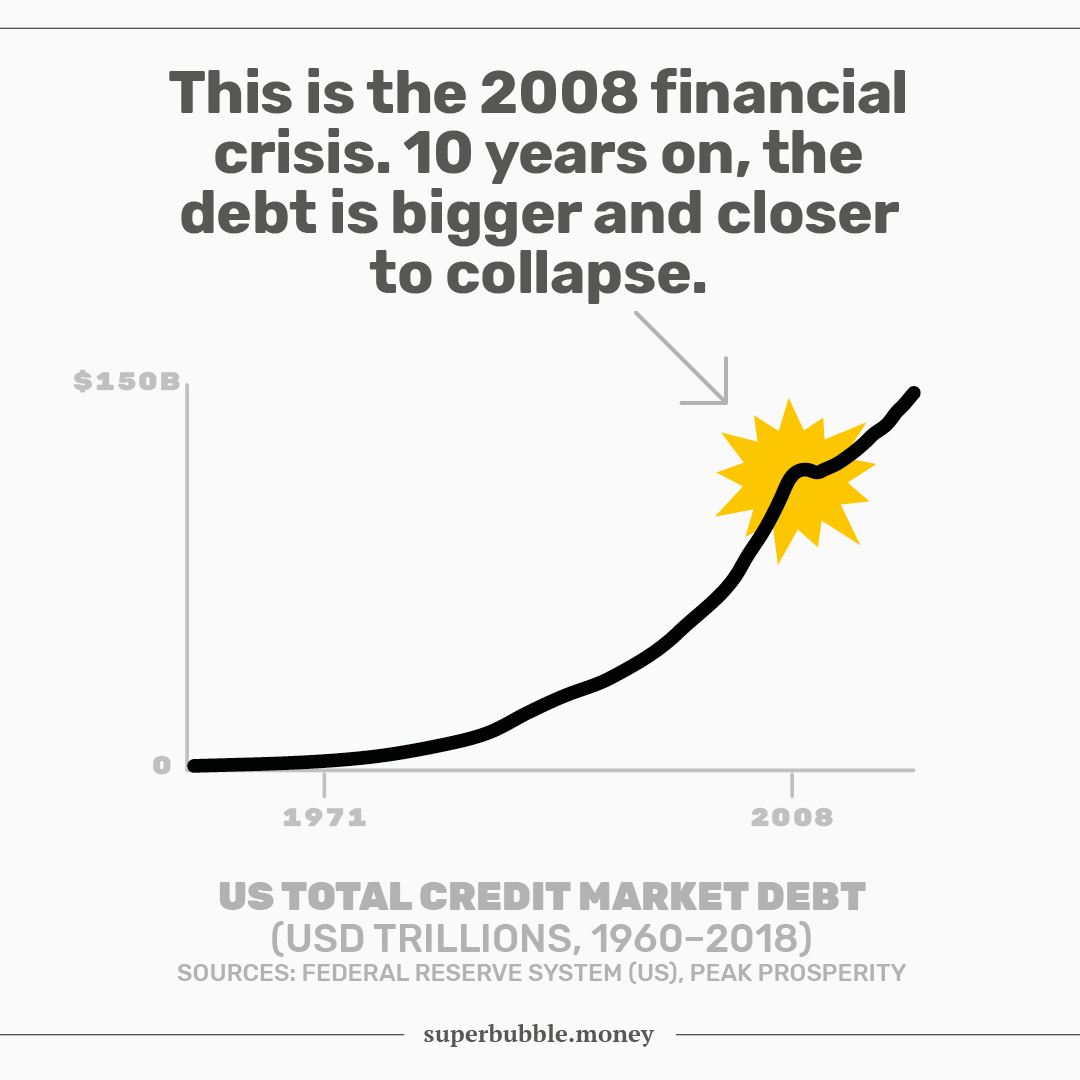 This chart shows that US debt began increasing exponentially after 1971. It also shows what almost happened in 2008 when the fragility of the system became obvious. A slowdown in debt expansion can and will crash the global economy. A system that crashes without constant growth is not sustainable.

Superbubble is about escaping that system.

SUPERBUBBLE IS FOR YOU.

It is made for people who don’t want to read lengthy tomes about economic history and the failure of currency systems.

Superbubble provides simple guides to economic ideas that can be hard for ordinary people to fathom. By ordinary, I mean lacking PhDs or careers in powerful institutions. These ideas might be difficult for  credentialed economists to follow, because they are quite simple, uncool and old-fashioned.

Superbubble is designed to be as simple as possible.

Most people cannot see what is coming, so cannot take appropriate action.

This is partly because the financial media – elite and alternative – are failing totally. They do a terrible job of showing people what is happening in plain sight. They failed in 2008 and they are failing again.

My task is to help ordinary people understand what is happening, so they can take whatever action they see fit.

Superbubble is the crazy story of our dysfunctional currency system, how it ends, and what happens next.

I believe this is by far the best way to understand the current state – and future – of the global economy.

You don’t need to believe or not believe the Superbubble story. No need to agree or disagree.

Superbubble is not investment advice.

It will give you a clear idea of how the global currency system is breaking down.

My aim is not persuade, just state the case simply – and entertainingly – and leave you to take whatever action seems obvious and sensible to you.

The clock is ticking. The fuse has been lit.

The slow-motion US dollar crisis started on September 16th 2019. It will accelerate.

Behinds closed doors, the world’s financial giants* have been planning for the end of the US dollar system for decades.

That time is now.

You should start thinking too.

Superbubble is what you need to know about failure of the global monetary system. And what you can do.

As well as this blog, there’s an email list.

Get on it. You’ll recieve offers and discounts and the outside dope on how to escape the US dollar Superbubble before its too late.

Endnotes.
When the Superbubble course is launched there will be some kind of community feature for further discussion. Make contact on Twitter. Join the Telegram Channel.