This was a Twitter thread. It offers great wisdom and some things to think about as we warm up for the next global debt crisis.

After reading you will see that the English-speaking, and Eurasian nations are on very different economic paths. And that the story is not covered in ways that *normal* people can access.

I avoid mainstream politics, but enjoy Scott Adam’s analysis of Trump, Biden and the art of persuasion . He recently asked interesting questions about socialism, capitalism, healthcare, and the size of the US military.

02. Beyond socialism and capitalism, it is more useful to look at the conflict between producers and consumers.

the English-speaking nations are the world’s biggest consumers. But not for long.

03. Scott says the US is a capitalist nation, in contrast to the UK and Canada which he cites as socialist nations. I won’t argue that*.

Instead, let’s note that the three countries Scott talks about have the world’s largest current account deficits.

04. The current global monetary system is based on US dollars. It encourages the most productive nations to send real stuff to the deficit nations (US, UK, Canada and others).

But not for long.

In return for their goods and services, the productive nations get IOUs which are typed or printed into existence. Most of these IOUs are US dollars, because the US dollar is the world’s reserve currency.

06. Accumulation of US paper by foreign central banks allows the US to run huge deficits. This funds a giant and unsustainable welfare/warfare state.

07. Why did the US become a consumption-based society?

Because it had to. Because the international role of the US dollar forces the US to consume more it produces. 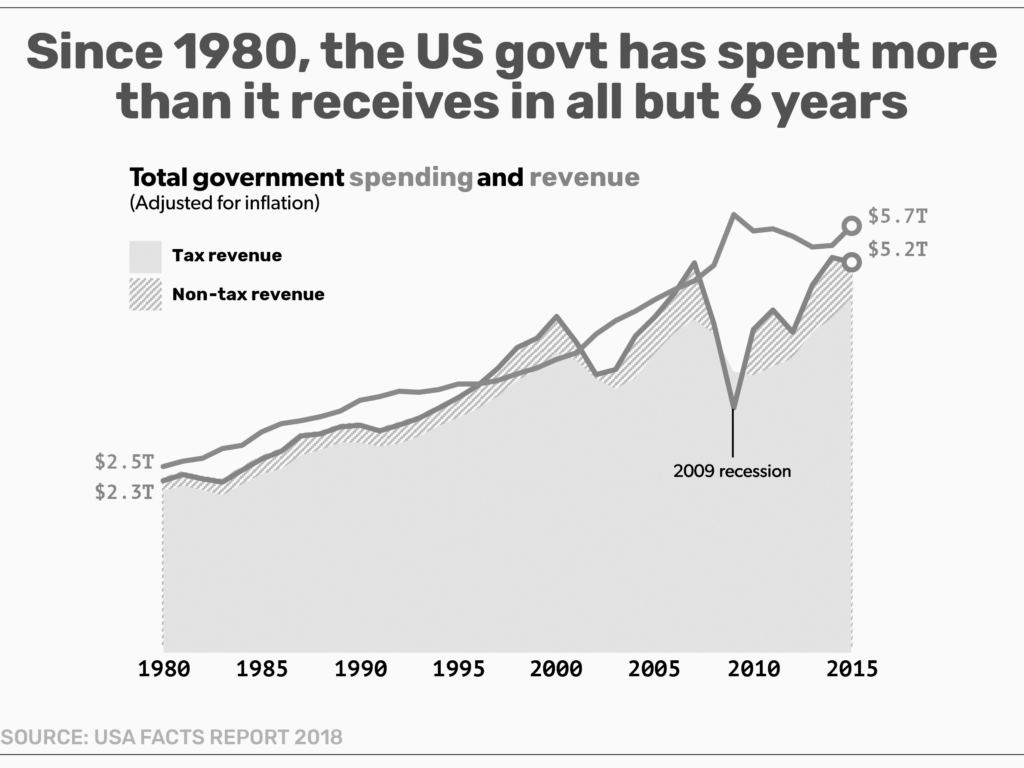 08. Reserve currency status means that the US must always supply the world with enough dollars for trade and investment. This distorts the economy, and puts contradictory pressures on the currency. These distortions and pressues are called Triffin’s Dilemma.

In the 1960’s economist Robert Triffin showed that the US dollar system was inherently unbalanced and destined to blow up. The imbalance is the ever-expanding US Trade deficit: over $22 trillion last time I looked.

That looks like a bad deal. Why does the world accept it?

One reason is that most nations need dollars if they want to buy oil. This is called the petrodollar system, and it is key to maintaining international demand for US dollars.

US dollar overvaluation is supported by its link to the global oil market. This overvaluation allows the US to consume more of the world’s production that it could otherwise afford. Barry Eichengreen explains this ‘exorbitant privilege’:

11. In November the 1989 US military’s main opponent collapsed almost overnight. However, US military spending has kept expanding after the demise of the Soviet Union. Why?

Again it’s the petrodollar. The US military is a key factor in supporting the US dollar overvaluation, although that part of its mission is really talked about.

12. US political & military action *encourages* foreigners to use the dollar – especially in the oil and gas trades. Remember when Saddam & Muamar tried to bypass the dollar in oil trading? It ended badly for them.

What do Iran, Venezuela, Russia, the EU and China all have in common? They are trying to bypass the dollar in oil trading.

13. Issuing the world’s reserve currency seems like a great deal in the short term, but since the 1970’s this has slowly wrecked the once productive US economy. Comedian Dave Chappelle reveals changes to US attitudes to making stuff:

Trump sounds nuts. “I’m gonna go to China, and I’m gonna get those jobs from China and bring them back here to America.” For what, nigga? So iPhones can be $9,000? Leave that job in China where it belongs. None of us want to work that hard. What the fuck is he thinking? … I want to wear Nikes. I don’t want to make them shits. Stop trying to give us Chinese jobs.

14. The ongoing expansion of the US debt Superbubble is mostly independent of party politics or policies: 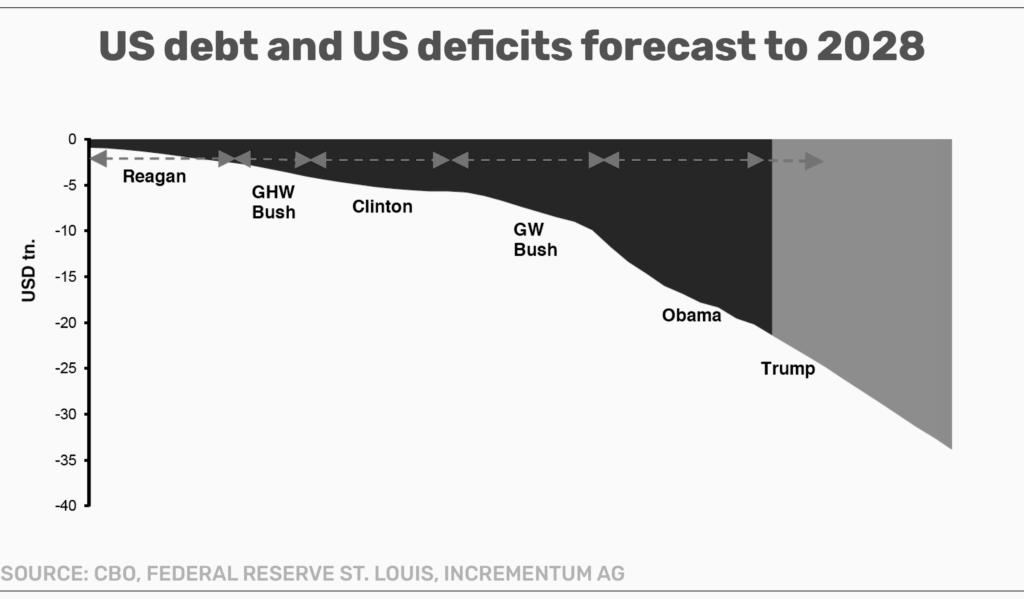 15. For US debt levels, it usually doesn’t matter who is president. But sometimes it matters bigly.

Devaluation is a way to avoid paying dollar debt in full: the debtor pays back the full count of dollars, but those dollars are worth a lot less in real terms.
It is reasonable to expect that the  ‘King of Debt’ will shrink US debt obligations. Via a presidential tweet, perhaps?

The United States could avoid ruin by becoming productive again. How?

People smarter than me argue that this also means bringing the currency ‘home’. This means ditching reserve status, and devaluing the US dollar.

Only then can the US start to think about having affordable healthcare.

18. The EU, Russia, China have been trying to ( quietly) move towards a more balanced global currency system. This process is called de-dollarization and it is behind a lot of the geopolitical turmoil we see (trade wars, Iran, Venezuela, Nord Stream 2 et cetera).

19. It looks like many major players want the same thing; a devalued dollar, re-balanced trade, & a multi-currency oil market.

Few talk about this openly. Here is rare footage of a US government official talking about the reserve ‘currency problem’.

“Currency problems are something I have spent a fair amount of my time worrying about … It’s not just a problem with China … But also some other areas. I don’t want to name any other countries, but it has been a problem from time to time, so it’s something we have to focus on. There are costs in being the reserve currency, but one of them can’t be that we lose the good people who go to work every day and have competitive jobs … But the reality is that we have spent a lot of time on currency. And the agreement will be enforceable and I think there will be something on it, but I’ll talk to you offline.”
Robert Emmet Lighthizer, United States Trade Representative.

20. The most likely way we get to a new global currency system is via an economic crash. Probably the biggest of our lives. After that, I am hopeful that humanity can enter a new era of relative peace and prosperity. A golden age perhaps.

Understand that the US dollar is losing its international role, and the rest of 2019 will make a lot more sense.

The Superbubble book and blog covers the transition to a new global currency system. This is a very large and complex subject. I aim to write about it as clearly and accurately as possible. Peace.

*The words ‘capitalism’ and ‘socialism’ themselves are no longer useful. ‘Capitalism’ signifies something obviously bad to some people, and something obviously good to others. This inflames a mostly fake debate. I prefer Richard Duncan‘s description of the US dollar-based system as ‘creditism’.