The United States has an insanely huge burden. In 2016 Trump said ‘we’re sitting on a time bomb’. Back then, the US national debt was 19 trillion dollars. Now it’s 23 trillion.

As the time bomb ticks louder, the biggest economic question of 2020 is ‘What Will Trump Do?’.

This blog post predicts an extreme course of action that – I believe – Trump will be forced to take.

Inside my mind these views are correct.

But my mind is a human mind, and human minds seek to confirm their biases – as a short cut to actual thinking. We evolved to be mentally efficient, but the downside is that humans can be totally deluded about almost everything and not even know.

To evade this trap, I test ideas by making predictions.

If the predictions are consistently correct, the model is good.

If my predictions are bad, I will be wrong on the internet, inviting trolls to troll. And haters to hate. Challenge accepted: let’s see how Superbubble predicts the future.

The problem: the United States has the biggest debt burden in the history of our species. Americans owe vast amounts of dollars to themselves, to each other, and to the rest of the world. There is zero chance most of this debt will be repaid:

“The debt is growing faster than the economy. It’s as simple as that. That is by definition unsustainable … And it is growing faster in the United States by a significant margin.”
— Jerome Powell, Chair of the Federal Reserve – Nov. 2019

Some people think Trump is evil, other people believe he’s a genius. I don’t get into that. I am interested in what Trump is going to do (as far as that can be known). Throughout his career The Donald has shown how he deals with debt. During his 2016 election campaign, told us:

“You say, ‘Hey, guess what? The economy just crashed. I’m gonna give you back half.”
— Donald J. Trump, President of the United States of America.

In 2016 Trump wrote his intention on a red baseball hat. Four words won him an election and changed the world.

MAGA means re-industrializing the American economy. It means bringing back manufacturing to parts of the country that were abandoned by offshoring and financialization. Trump’s base in middle America lost, while Wall Street and Washington won and financialized the US economy.

But Trump cannot make America great with the US dollar as world reserve currency. Why? Because in the current global financial system:

Why would America make real stuff when foreigners will make it cheaper, in return for IOUs that can be printed or typed into existence?

To make America great, Trump (or whoever comes after him), must devalue the US dollar and/or ditch the US dollar’s world reserve currency role.

I believe capital controls are inevitable as part of this process. Capital controls would prevent citizens and institutions taking money out of America. [Edit: 9 Jan 2020. This long article lays out why the US government *must* enact capital controls.]

Most people don’t see this coming. I ran a poll on Twitter and the results show that a majority believe the international dollar system has many years left to run.

I see it differently. And I believe Team Trump does too.

WHY WOULD TRUMP DEVALUE THE DOLLAR?

a) He has to: the US dollar is hugely overvalued. Logically, if a thing is overvalued it is sensible to devalue it.

b) Sudden devaluations are what governments do when debt burdens become uncomfortably large.

Politicians all over the world use this trick as often as they can get away with.

During the 20th century US presidents have periodically – suddenly – lowered the value of the dollar. This made their debts much easier to pay back in REAL terms (decreasing the VALUE of dollars owed, without changing the AMOUNT of dollars owed.

The Superbubble perspective is not fashionable (in the English-speaking world especially). But the rest of the world has long seen what is coming and quietly prepared a new monetary system to take over once the US dollar system collapses under it’s own weight.

Trump’s optimal strategy might be to seize the initiative and do what was going to happen anyway – but on US terms.

If and when Trump devalues the dollar, after a few months of pain, dollars, jobs, and troops could return home to the US in increasing numbers.

Trump could then claim he had Made America Great Again and fulfilled his promise.

THE PEOPLE WHO AGREE

Several officials within the Trump Treasury Department fully grasp and are competent to initiate an end to the so-called Triffin Dilemma—the fact … that any increase in official dollar reserves must be matched by an equal deficit in U.S. net exports.

In plain words: members of Team Trump are ready to end the US dollar’s world reserve currency status. Big clues at this aim have been left by Wilbur Ross, Steve Mnuchin and Judy Shelton.

Two former IMF officials confirm that the dollar is too strong and needs to be devalued.

We live within a purely abstract global monetary system. The US dollar is the world reserve currency. It is a fiat currency token. Fiat means that the value of a dollar is decreed by a government (making it legal tender and necessary to pay taxes).

In the US dollar-based international financial system, the US president is the final arbiter of the value of a dollar. 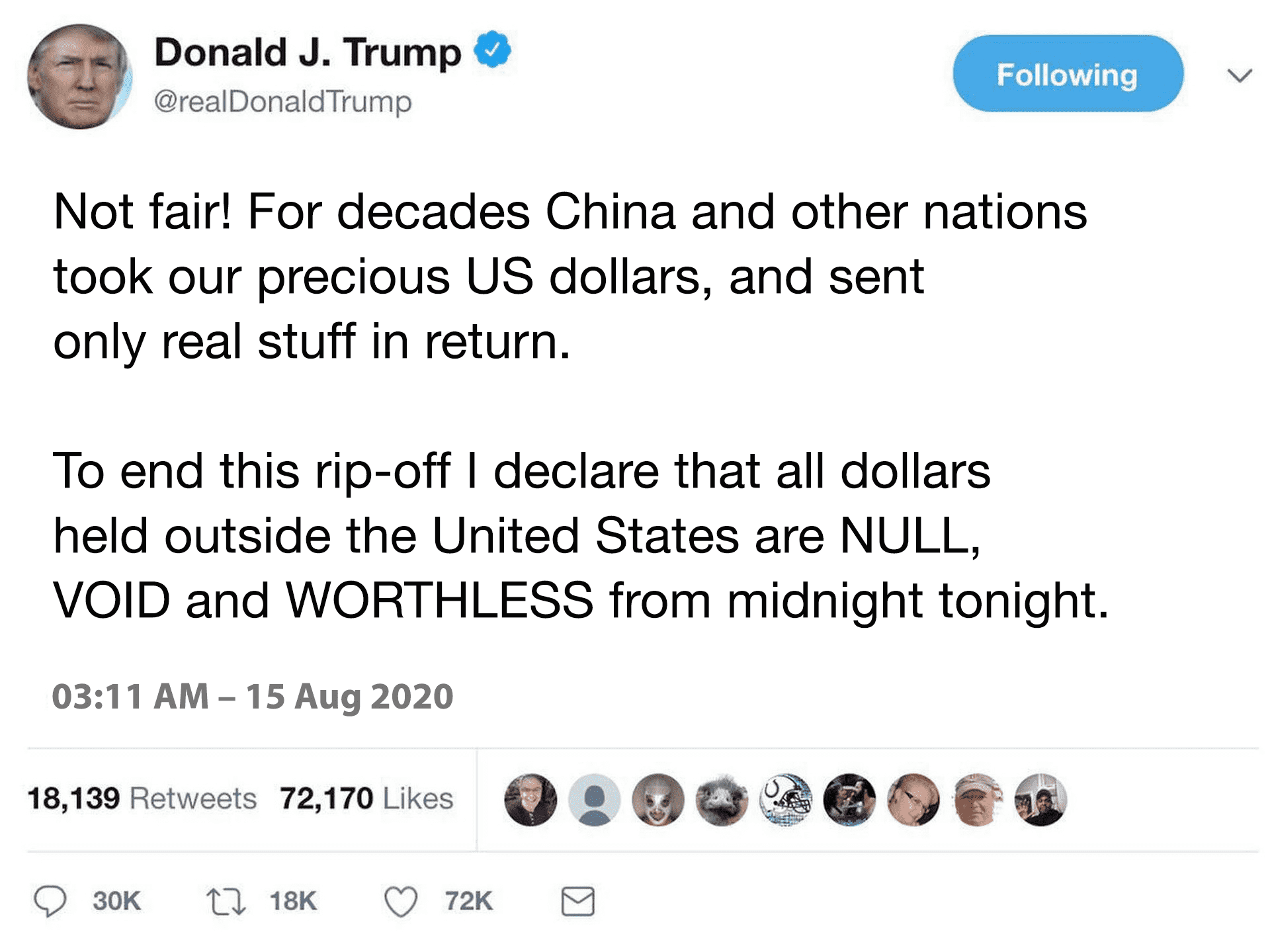 “No-one could have seen it coming”.

Do you feel good keeping your savings, your retirement fund, your kid’s future in a currency token that could be devalued instantly? In a decision made by a small group of men in Washington? Using only 240 Twitter characters?

Across Eurasia, monetary elites have long considered this prospect. In recent decades Europe, then some oil states, then Russia, and now China quietly made alternate arrangements.

Luckily, ordinary people can follow in the footsteps of these financial giants and buy a monetary asset that a broke a government cannot devalue instantly.

I expect Trump to deal with unpayable US debt the same way Roosevelt did in 1934, and Nixon did in 1971: A sudden, political decision to devalue the currency.

When will Trump do it?

It could be soon. Maybe tomorrow. Maybe during his second term as US President – which will happen (one more prediction provided free of charge).

Surprise is the optimal strategy. There are tremendous advantages to catching the world off-guard (as Roosevelt showed in 1934, and Nixon showed in 1971).

The only question that matters now is:

If not, check the Superbubble ‘Dont Panic’ course. It was created to help non-experts understand, and act before the next financial crisis. The Superbubble book will be available later in 2020.

Having read this far, you cannot say you weren’t warned.