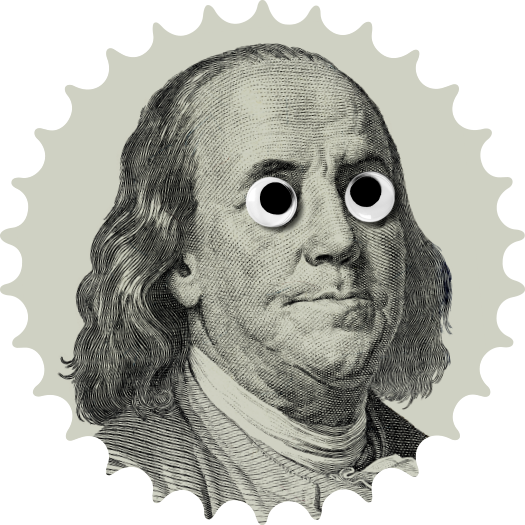 Most people have zero interest in economics, finance and monetary systems. However, big changes are happening that are crucial to understand. These changes will affect pretty much everyone on the planet. And for many these changes will not be good.

The global financial system is a lot less complicated than you were led to believe. Ignore the noise and chaos. Instead watch the actions of the major players, and the most likely outcomes become pretty obvious.

To make Superbubble as useful as possible, I answer questions. Some of the definitions below could be debated. Hotly.

WTF is a Superbubble? • Does the end of the international system mean the collapse of civilization? • What happens next? • What’s the problem? • Is there a solution? • What happened in 1971? • What is the petrodollar? • What are eurodollars? • What went wrong in 2008? • What is de-dollarization? • Gold. Srsly? • Exorbitant what? • What do central banks do? And what is a their biggest problem? •

WTF IS A SUPERBUBBLE?

DOES THE END OF THE US DOLLAR SYSTEM = THE COLLAPSE OF CIVILIZATION?

I doubt it. Although the news looks ever-more you chaotic (yellow vests, red hats etc.).

I think it’s quite clear the direction events are going in, even though to most people it looks very chaotic (populism and trade wars and stuff like this)

But if you look at economic history, populism and the current upheaval is what we normally see at the end of a sovereign debt bubble.

We are are merely seeing the transition to a new currency system.

We’re at the end of one system of currency and transitioning to another one. We’re ending a US dollar-based currency system and moving to something else.. At the root of all these things is a change in the currency system.

If you can understand the international dollar system – and how it ends – the world will make a lot more sense.

After more than 70 years of continually stockpiling US Treasuries, central banks recently stopped. Without continued accumulation of US paper the US has to fund its deficits for the first time in decades.

The actions of the world’s major central banks suggest that they are preparing to replace US paper with physical gold as the world’s primary reserve asset. 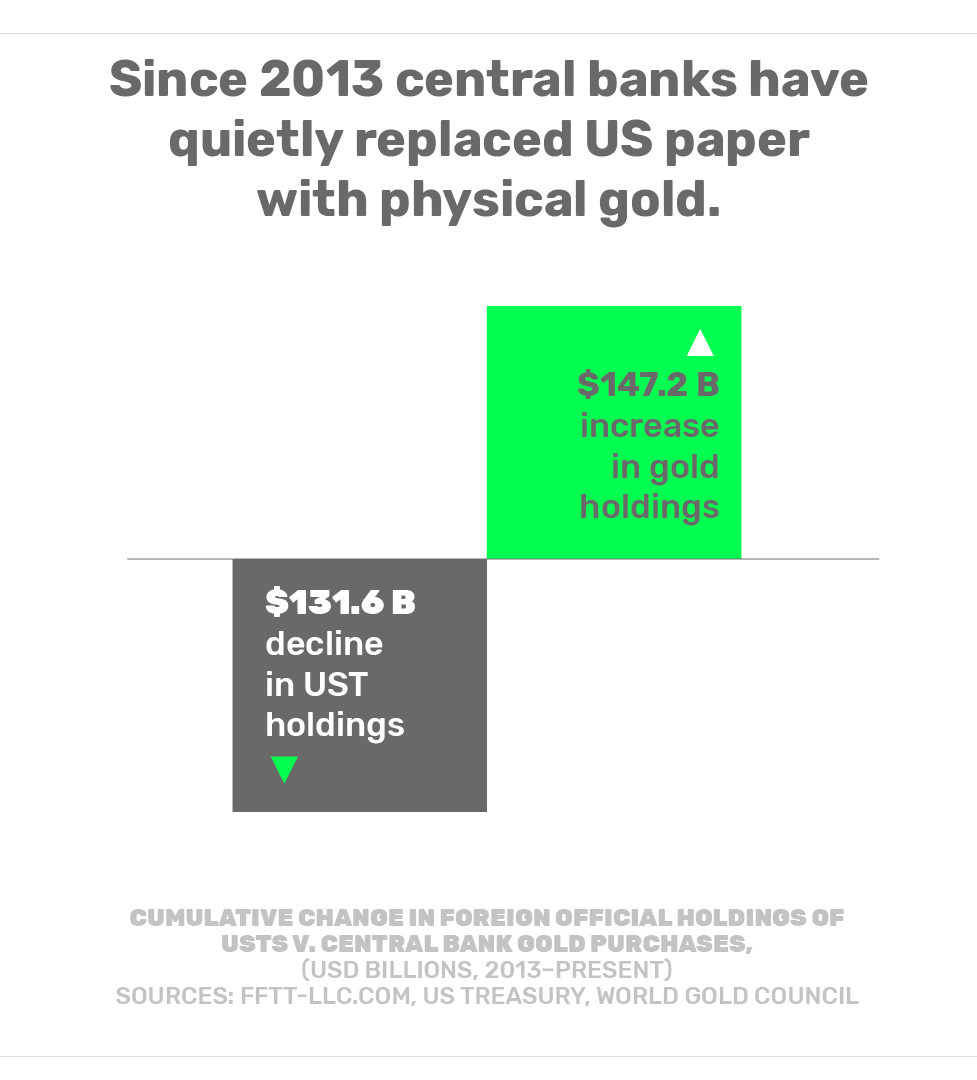 Replacing US paper with gold as the world’s would require further main steps:

Step 1. Devalue the US dollar. History shows that this can be decreed easily and suddenly by US presidents. It happened in 1933/34 and 1971. It cannot happen again, especially as US President Trump told us how he liked to deal with debt in the run-up to his election.

Whether you call it ‘negotiation’ or default, we can be pretty sure US creditors will not be getting their money back (in real terms). Trump’s core team have hinted talked about writing off US debt in more or less subtle ways.

Step 2. Increase the price of a yellow, shiny and useless substance to some very high number.

These steps could occur together, or separately – It could be a long drawn out process or happen overnight. This is a big subject, and many economists would find these claims / expectations fairly insane.

But 2008 showed that macro-economics is mostly BS that fails to tell you anything and useful (in overly complicated language).

The point of this website is to test the truth of these idea. So I continue to do that.

Too much debt. More debt that can ever be paid back. The US dollar is the world’s reserve currency. This is odd, because the US dollar is itself a form of debt. Dollars can be created in infinite amounts, and exchanged for real stuff. It’s not a  surprise that there are far too many dollars in existence.

IS THERE A SOLUTION?

There are two mains steps to solve the problem:

First, a realization that most of the debt cannot and will not be paid back. These realizations take the form of financial crises, debt cancellations, and currency devaluations.

Second, as the global debt Superbubble deflates, the system will need to be recapitalized with a new monetary anchor. This can (and will!) be done by raising the price of something yellow and useless to a very high number. The actions of a few important institutions indicate that this is where we are headed.

1971 was the final step in a 49-year process which removed gold from the monetary system and replaced it with paper promises (mostly issued in New York and London). Other notable dates in this process are: 1922 (Genoa Conference), 1933/34 (FDR confiscated gold and devalued the dollar), and 1968 (gold-backing of the dollar was officially ended by the US Congress).

In 1971 US President Nixon went on national television to announce sudden changes to the world’s currency system. He canceled international convertibility of US dollars to gold. He also told his audience that the US government would not give European central banks gold owed to them.

Why did Nixon do this? Before August 15th, 1971, the value of the US dollar was linked to gold, and the value of major currencies were linked to the US dollar. Under the Bretton Woods system, nations importing more than they exported could periodically settle the difference with shipments of physical gold. In the years before 1971, the US imported a lot more than it exported, so had to send a lot of gold abroad (mostly to Europe). By the time of Nixon’s announcement, America’s gold reserves were down to 8,133 tonnes (from a high of over 24,000 tonnes).

Removing the US dollar-gold link created a problem for the US. Why would foreigners accumulate dollars if they could not redeem dollars for gold? The solution was the creation of the petrodollar system.

Why does this matter? Previously, the amount of money/credit the US could create was limited by the amount of gold they had. Removing gold from system removed the limits. This allowed the creation of vast amounts of dollar-based debt.

WHAT IS THE PETRODOLLAR?

Paper or digital US dollars can be printed or typed into existence in infinite amounts. However, much of what can be bought with dollars requires finite labor and resources to locate, extract, refine, transport, design, manufacture, assemble, market and deliver. So why do foreigners collectively send real goods to the US in return for IOUs that can be created out of thin air? The answer is the petrodollar system, which creates international demand for the dollar. Foreign nations needing oil – as most do – need US dollars. To get dollars foreigners must export real goods and services to the US. This is called the exorbitant privilege and is how the enormous US twin-deficits are funded. In other words, a large percentage of US government spending on welfare and warfare programs is funded by foreign nations.

Eurodollars are another kind of incomprehensible modern money (like financial derivatives and bitcoin). Eurodollars are US dollars created by commercial banks outside the US. Being located outside the United States, eurodollars escape US regulation. They can be typed into existence in infinite amounts, and used to purchase real stuff, or to create loans (which have to be paid back with ‘real’ dollars. Very few people fully understand the eurodollar system, and that  key to its success. How could any government regulate what no-one understands? Jeffrey Snider’s Eurodollar University provides excellent analysis of the subject.

The 2008 financial crisis was triggered by excessive US debt. To save the system, more debt was created. the U.S. Federal Reserve typed trillions of new dollars into existence. Monetary authorities in other parts of the world created a lot of currency too. The newly typed money was given to major financial institutions – some fraudulent. This bought the system another few years. It also made the Superbubble bigger and more unsustainable.

I know. Physical gold is a very unfashionable asset – especially in the English-speaking world. There are places where you cannot give it away. The US and UK have been letting gold flow East for decades. However, as New York and London lose control of the gold market, our ideas of what is cool or uncool are becoming a lot less relevant.

The term ‘exorbitant privilege’ was coined by the French politician Valery Giscard d’Estaing in 1965. It describes the advantages the US gained by issuing the world’s reserve currency. Barry Eichengreen explains:

In other words: dollars the US can print or type into existence have the same value as dollars foreigners have to work for. That gave the US incredible economic advantages. I describe it in the past tense, because it is coming to an end.

WHAT DO CENTRAL BANKS DO?

Many believe that central banks create most of the money in circulation. This is not true. Nowadays, most of our money is created by commercial banks when they make loans.

This is a problem because in our financialized, casino economies, commercial banks are out of control. Of course they are. That is their nature. So they created far more money (debt) than can ever be paid back. This threatens not only the banking system, but the value of currencies.

Despite that, central banks are still the most powerful players in the monetary game. They make the rules. They decide how much money and credit are in the system (the chart above signals their failure).

WHAT IS A CENTRAL BANK’S BIGGEST PROBLEM?

The most important role for a central bank is to ensure ‘price stability’. This means maintaining the value of the currency they manage.

In theory, the major central banks are independent: free to maintain price stability how they see fit. However, this is often an illusion.

Most central banks have one very big problem:

Is the economy about to collapse? • What replaces the dollar as world reserve currency? • Other currencies are also f*cked. Why focus on the dollar? • How is the euro different to the dollar? • Why does the United States borrow a currency it can print? • Why is populism rising everywhere? • What is a reserve currency? • What is a ‘debt-backed’ currency? • What is an ‘oil-backed’ currency? • What are US Treasuries? • What does ‘risk-free’ mean? • How much debt is too much? • What is dedollarization? • Will Bitcoin save us? • Will Modern Monetary Theory save us? • Isn’t gold too old-fashioned and primitive to be part of the modern financial system? • What was the Gold Standard’s fatal flaw? • How could that flaw be fixed? • Is this a conspiracy theory? • If this is true, why isn’t it front page news? • How can you be optimistic in this dire epoch?

If you have a question, ask via the contact form or Twitter. I’ll address the best ones next time around. Thx.