Trump will gone in less than a week, but those expecting a return to ‘normality’ will be disappointed.

Because the power of a US president is hugely overrated.

Trump made promises and threats, but in the end: 11 million Mexicans weren’t deported and America was not made great again.

Peter Thiel (founder of PayPal) sees US presidents as:

mayor of the country, but dictator of the world … Because within the US their power is very limited.

Looking back, claims that Trump was some kind of dictator look hysterically overblown.

I have already spoken to three US Presidents. They come and go, but politics stay the same. Do you know why? Because of the powerful bureaucracy. When a person is elected, they may have some ideas. Then people with briefcases arrive, wearing dark suits … This is what happens with every administration.

The strange powerlessness of America’s presidents can be seen in their ever-growing debt Superbubble.

This chart shows US debt national growth under the last 5 presidents. 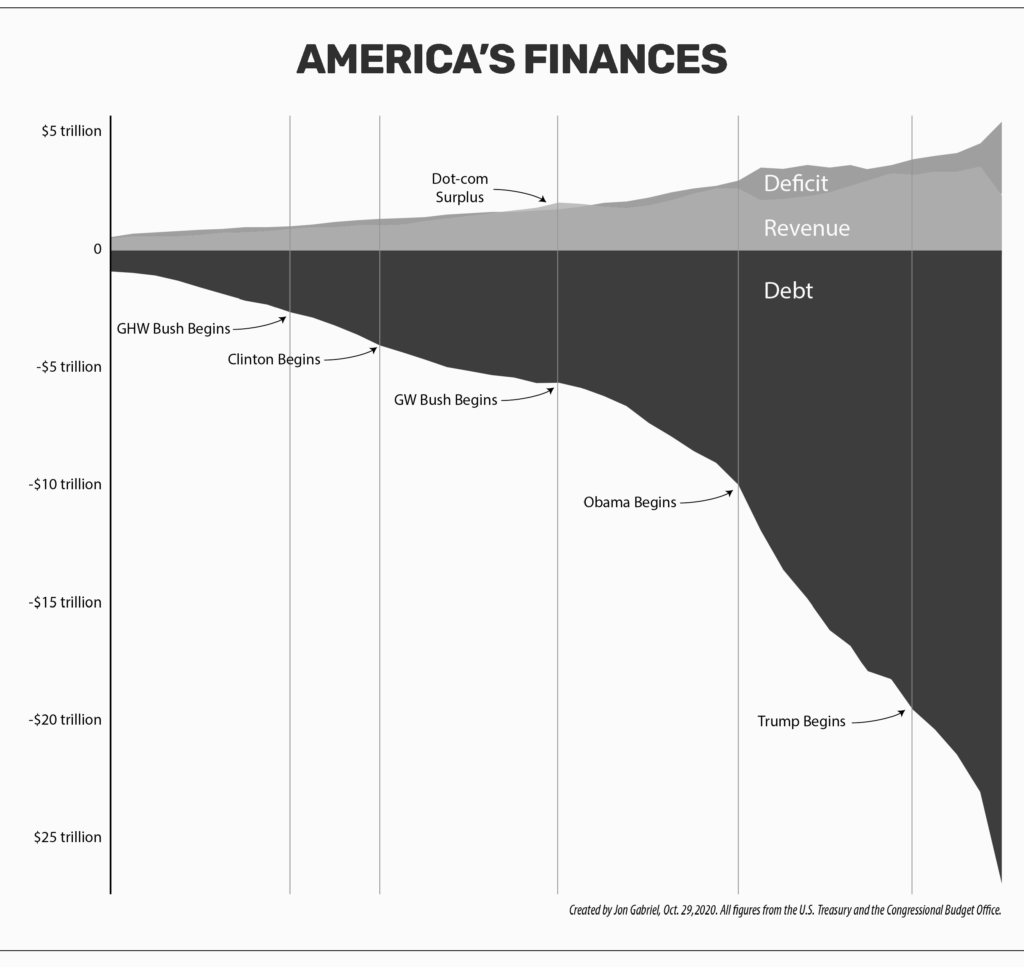 For decades, the US debt burden has grown exponentially as more and more bank debt was created. Easy credit drives up asset prices (too much money chasing not enough stuff).

The chart below makes the correlation clear. It shows the Dow Jones Industrial Average (the stock performance of 30 large companies listed on US exchanges). 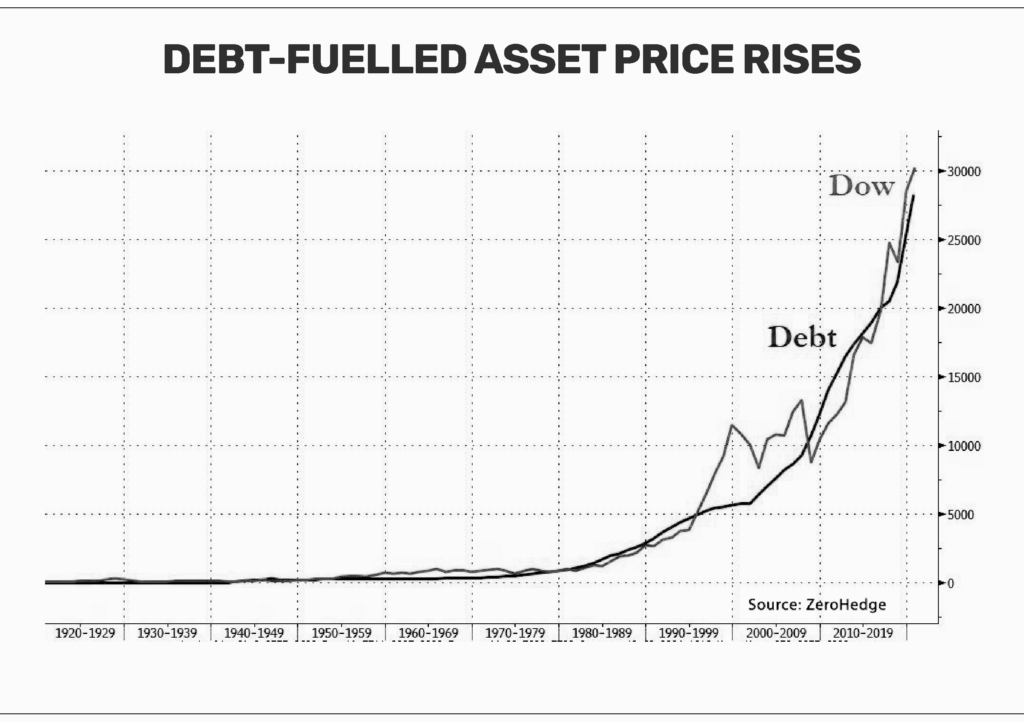 Stock market rises are great for the wealthy, but the gains are not shared evenly.

In recent years, it has become impossible for large numbers of working Americans to make ends meet.

According to the Manhattan Institute, a typical US worker now needs more than a year’s salary to afford the basic fixed costs for a family of four (housing, health care, a car, and education).

Trump could not fix these problems, and Biden’s chances are zero – in my non-expert opinion.

So, whether left or right, America’s new underclass have plenty to complain about and the only politically acceptable ‘solution’ is to create more and more money out of thin air.

Even before the election, the next steps were clear: 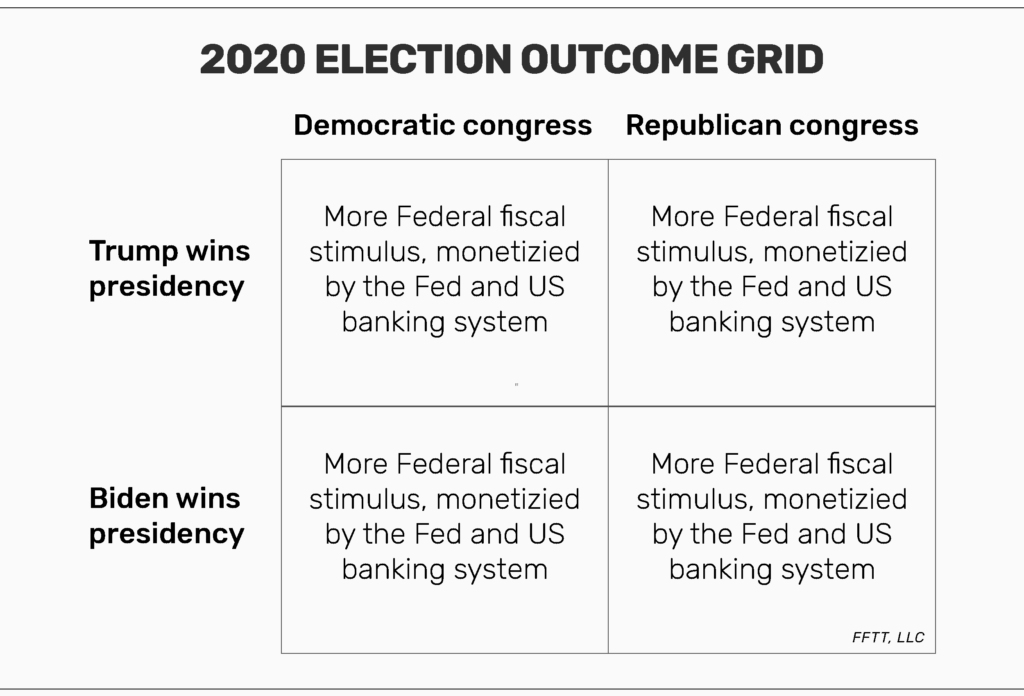 The winner was always going to fire-hose digital dollars into the financial system to postpone economic and social collapse. Most of these dollars will go to major commercial banks – who are forced to buy US government debt – staving off collapse by blowing the debt bubble ever bigger.

Today, the markets rose on news of Biden’s plan to create $2 trillion for Biden’s coronavirus stimulus plan. There will be more.

WHEN WILL IT END?

There is no mathematical formula. The only limit on how many dollars the Fed can create is how many numbers can be typed into computers.

Before that there is a psychological tipping-point: the confidence of America’s creditors and citizens. How long will they collectively believe that their dollars will maintain their value into the future?

A loss of collective confidence is the tipping-point for systemic collapse.

So far, 28 trillion dollars of national debt has not been enough to trigger panic. Let’s see what happens as the number approaches $56 trillion or $106 trillion or more.